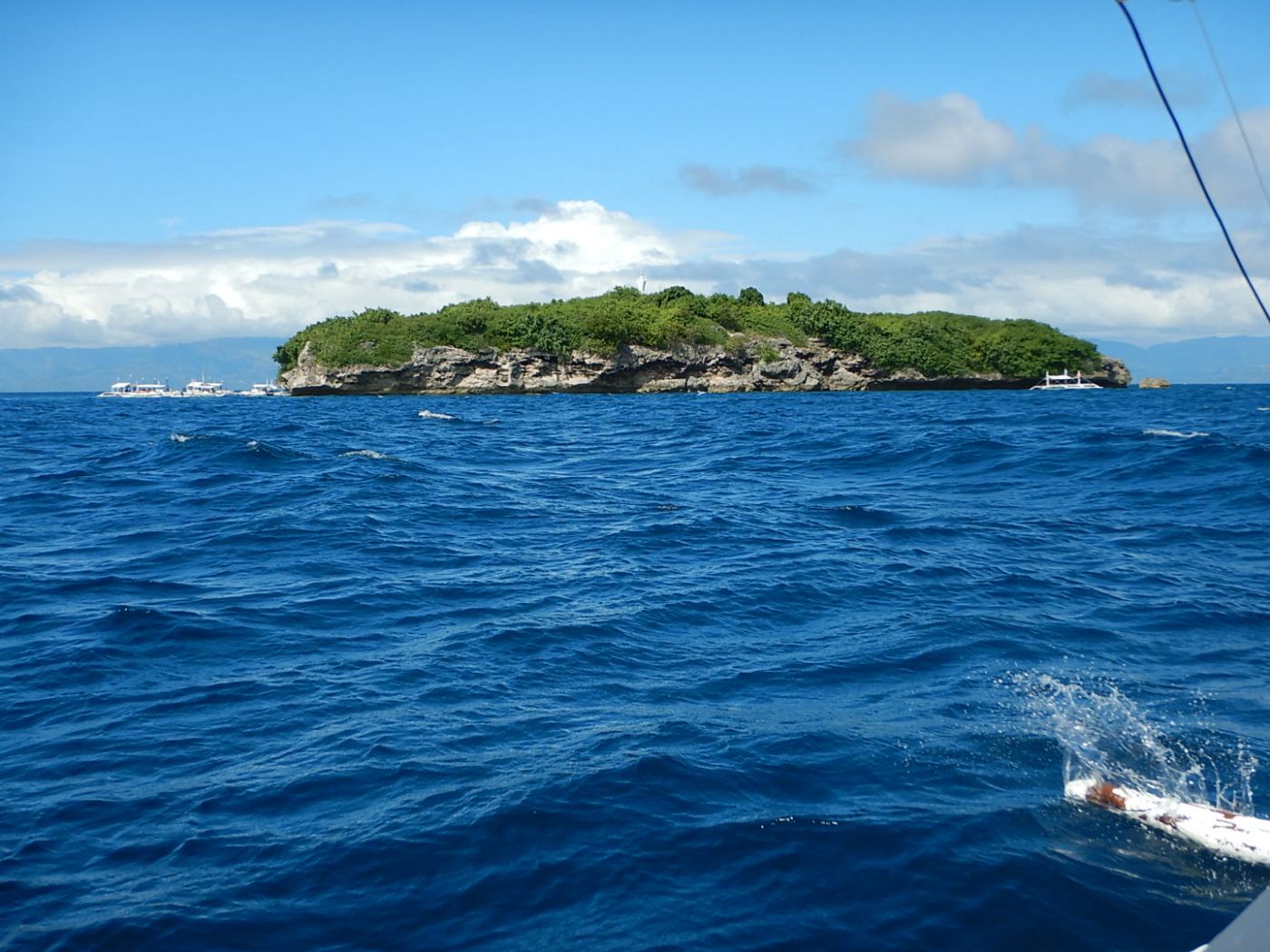 From Flores we went via Denpasar and Singapore to Cebu in the Philippines. Denpasar and Singapore were fun as ever, but we were really looking forward to the Philippines as everyone we met on our travels told us we’d love it there. The only thing we were warned about was the food; it was not going to be good! And you know what? The food is not good. And maybe because of it, after our first 5 days on Cebu Island, we’re not quite feeling it yet.

I am not a meat eater by far. I’ll eat it if I must, but if I can find an alternative, I’ll take it. It has nothing to do with saving the world (although that is a nice benefit), it’s just that I don’t like it much. Filipinos on the other hand LOVE their meat and everything greasy with meat grease. Ugh. Pork seems to be a favorite. Vegetables are rare on the menu, and even rarer on a plate. My intestines have been upset since day 2. On the positive side, my fitness has improved from having to run to the nearest bathroom every time I eat something.

In Cebu we tried Lechon in the House of Lechon; it’s a suckling pig marinated in mojo and then slowly roasted. There are different types you can order and we chose ¼ kg of the Carcar and ¼ kg of the spicy version (the thought of ordering half a kilo of pork was daunting, but hubby assured me it was gonna be ok). It was our first day in the Philippines and we were in a kind of overload, so we missed the fact that Carcar is a city on the island. We figured carcar stood for a type of roadkill and felt very adventurous.

Anyway, service was very rapido and the pork dishes (literally) were put on the table before we could google what carcar really was. We were disappointed in the spicy version: it was just the fatty bits and some undetermined parts of the pig. We kind of left it. The Carcar version was actually quite nice, except that the skin was not crispy enough to our liking, it was just greasy. Even hubby couldn’t chew it and that says something! But as far as the meat goes, it was delicious. Definitely not roadkill.

As a first impression we were carefully optimistic. But if we’d known then what we know now, we would have been ecstatic!

From Cebu we went to Moalboal, to see the Sardine run. We stayed in a place a little of the beaten track, and although the room and the pool were magnificent, the restaurant was not (really not!!!). To forget about the food issues, we googled around (found a decent enough restaurant about 10 minutes’ walk away) and figured we’d find something fun to do. Online everyone was raving about the island-hopping tour in Moalboal, so we figured we’d go for it. Three different stops (we passed on the dolphins, too early for us) and it was a little vague where exactly those 3 points were. We didn’t worry about it, as we were sure it would work itself out.

On the day of the tour, we first had to go to the Moalboal port to register and to get a briefing. This in itself is a good thing. They tell you what you’ll be seeing, what you are allowed to do and most importantly what you are not allowed to do (no touching of anything!). We got excited so off we went in this really cute typical boat.

First stop: Pescador island to snorkel on the reef garden. It was cute. We love being in the water, so we were happy to explore a little. We had no guide, so we had to find cool stuff on our own, but I think we managed. It was also a great opportunity to try our new camera! Yes, we got one while in Singapore. So here are our first pictures.

Then we went off to the Sardine run. When we got there we were utterly surprised as they were ‘running’ approximately 20 meters from the beach. We could have just walked there and taken a little swim to see it, instead of doing a 3 hour tour on a noisy boat. Anyway, we were here now so in we went. At first I didn’t see it, I was on the wrong side of the boat. Then I turned around and stared into this immense school of fish, layer upon layer of sardines as far as you could see! All moving in the same way and same direction. Amazing! Not sure if the pictures do it any justice, but here they are. 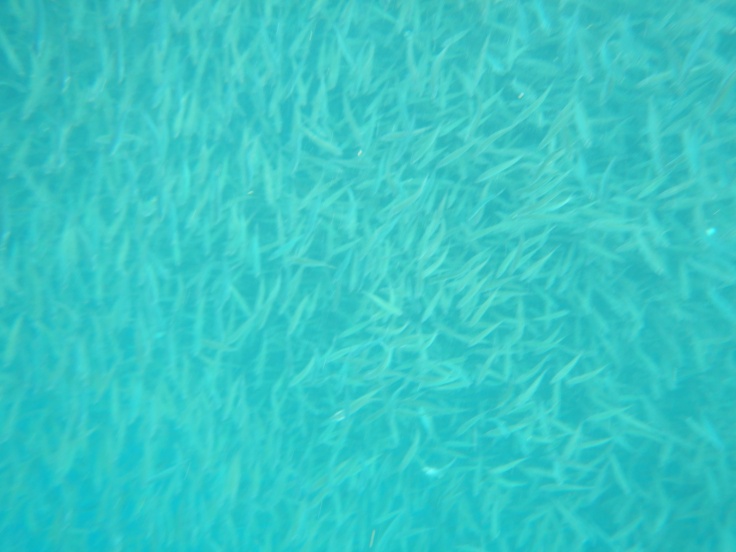 Unexpectedly, we ‘bumped’ into a turtle, together with 10 other people (which surprised us since it was so close to the beach). The poor turtle kind of had enough of it quickly and swam up for a breather, followed by all of us. It came very close to me, I could have touched it. Instead I took a picture! 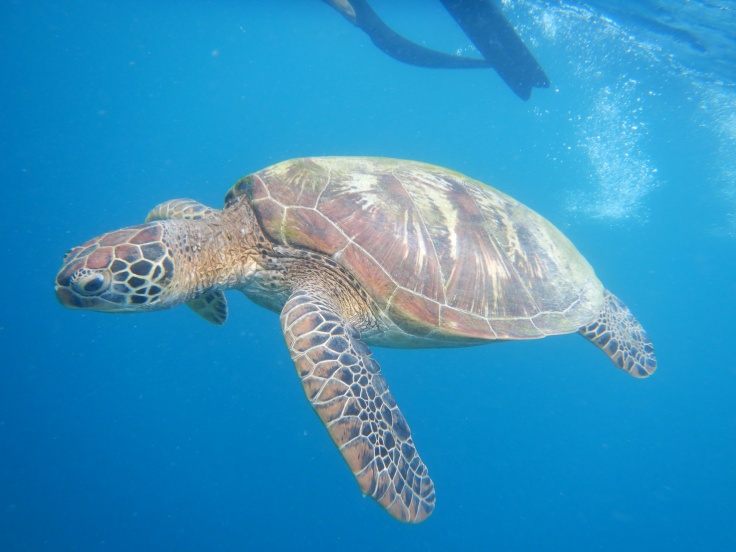 Our third stop was on Turtle point and what do you know… located right outside the hotel we stayed at. Yes, well anyway it was good that we had the guys come along, as they sure are better at spotting at turtles than we seem to be. They are surprisingly well camouflaged (the turtles, not the guides); when they pointed it out (the guides, not the turtles) it still took a while for me to actually see it. Haha. See if you can do better with these two turtles.

It was pretty neat, so a good day. That afternoon we did a little soul searching. Shall we go to Oslob? Or move south towards Siquijor island. We chose the latter. Oslob is famous for whale shark watching. You can get as close to them as I got with the turtle. But the fishermen feed the whale sharks and this is changing (or has changed) their natural behavior. If you’d like to know why that is bad you should read this article! It’s only one of many. So, moral of the story, find another spot to go watch them in the wild. Somewhere where they don’t get fed.

We decided to make our way to Santander. By public transport. In a non-aircon bus. That sounds a lot more dramatic that is was, because we were at the end of the route and not that many people were riding along anymore. We had the whole backrow to ourselves and I consider it exposure-therapy for my fear of roller coasters.

While we were on our way, a lot of people left the bus and some new ones came on. We could have moved forward, but we were pretty comfortable where we were. Only one time did we hit an enormous bump in the road which made us flying upwards from our seats. Before we had come down, the conductor was already checking if we had hit our heads. Not sure if he would have just laughed or if he would have given us a Band-Aid. Probably the first one, as only white folk keep in the back seat while there is plenty of room in the front. Either way, we didn’t hit our heads, so we were good!

From the bus station we wanted to take another bus to the resort (as supposedly this was on the route). But some bus driver told us to take a tricycle instead (“No ma’am, there is nog bus going, better take tricycle); the tricycle did take us there pronto for less than S$ 4, but it turns out our ‘resort’ actually is on the bus route, so the how and why mystifies us. Are people trying to get us there asap (even though we are not at all fussed about time)? Or are they throwing the tricycle riders a bone whenever a tourist arrives in town? We prefer to think the first.

Anyway, when we got there the Pebbles Beach resort looked all nice and fine, and yes there even was a restaurant. Eating there was a mistake though and led to a frantic google search for better food. Guess what: we found a Belgian Bistro and an Italian restaurant. We also got word that the resort next door did have good food! So this town is shaped up to be magnificent on the food sight. As long as we can avoid Filipino food, I think we might grow to like it in the Philippines 😉