If you think seeing the Orangutans was amazing, you are absolutely right. But it didn’t stop there. We also went to Tangkahan, a tiny little village that is working really hard to become an eco-tourism attraction, built around the elephants that have lived there forever.

In the 1980s and 1990s logging was the main source of income in Tangkahan and elephants were used to do the job. When the villagers realized that this activity was damaging their own environment, they collectively decided to quit logging. So far, so good. But in Tangkahan, even though it is beautiful there, the money also does not grow on trees, so they had to find another way to make a living.

The people of Tangkahan formed the Tangkahan Tourist Institute and they came up with regulations prohibiting the exploitation of the surrounding rainforest. To enforce this, the Conservation Response Unit was formed (CRU), where the elephants (that were out of logging work) and their mahouts help safeguard the national park to protect it from poaching and illegal logging.

Currently the seven Sumatran elephants patrol the national park while the mahouts follow them on foot behind them. But feeding an elephant costs a lot of money, and that’s where the tourists come in. When the elephants come back from patrol, they get to bath in the river. And tourists pay to help washing the elephants. In the high season there can be up to 100 people and only half of them can actually help, otherwise it would just be too much.

We were very lucky! Together with two German girls from our hotel, we took the trip to Tangkahan. From Bukit Lawang it’s a 2.5 hour trip to the village. Over not such great roads and through the palm oil plantations. They are bloody everywhere. Do we really need so much palm oil? Anyway, that’s for another blog.

When we got to the village, we were taken to the hot spring; a little hole in the cliff on the other side of the river that indeed disposes of hot water. The swim to the other side is the most exciting, as the current is rather strong and there is no real landing point. If you miss it, you’d might end up God knows where, so not an option. We swam hard and we all made it, although some of us had to grab some helping hands at the last moment (yes me of course).

After the swim, we were treated to a really delicious lunch. And then we got to the cute part of the program. Part of the fee we paid to see the elephants goes to the upkeep of the village and to keep this school open as well. Twice a week the kids from Tangkahan will gather in a small school building to learn English from their Indonesian teacher. 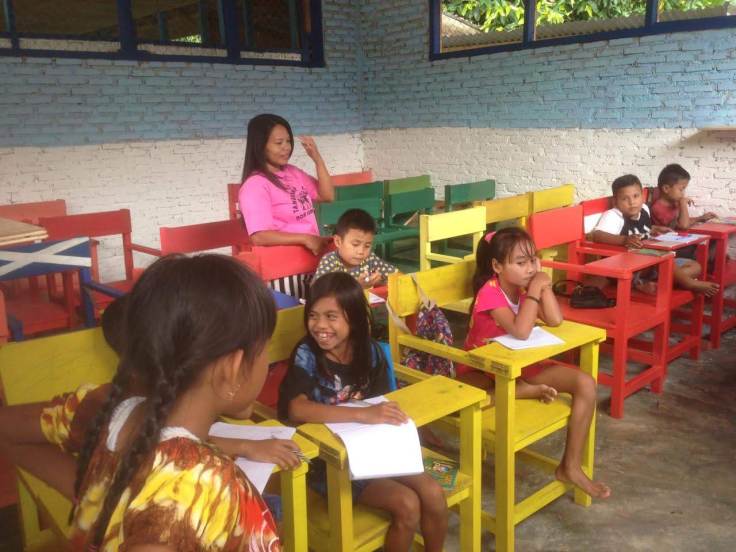 Little kids are very cute, little Asian kids are the cutest and here we were in a classroom full of them. Joy! Their English was better than our Bahasa, so we taught them a little and they taught us more. And then, then it was time for the main event: elephant washing. And lucky us! Only the four of us were there, and we had 7 elephants to wash!

As we approached the river the air was torn by a rather alarmed sounding trumpeting which made us all a bit nervous. It turns out they were conducting an internal exam of the male elephant and one of the caretakers had his arm up the elephant’s rear end right up to the elbow.  I think I would yell too if I were subjected to that.

Even though the Sumatran elephants are smaller than their African cousins, they are still big and heavy! You wouldn’t want any of them stamping on your feet, but surprisingly enough they are very careful about where they put their feet. They are also very gracious, more so than me. Three of them had a baby. The babies were all bigger than me. But they were gamboling as best they could and we definitely made a point not to step in their way! They were also naughty, trying to get to the fruit before they were supposed to. Tourists are not really allowed to touch them, as they are unpredictable and untrained.

The washing was cool; elephant skin is very tough. It kind of feels like pigskin but tougher. We got serious scrubbing brushes to help clean them, which would feel to them as a light feather. They loved getting wet and getting them to lie down so we could wash them was not an effort at all. They apparently like the scrubbing, it feels like a relaxing massage to them, or so we were told. They closed their eyes while being scrubbed, and looked totally at peace.

After the scrubbing we got to douse them with water and then they did the same to us! Showering in elephant water; we all felt we’d never wanted to wash ourselves ever again (for the record: we did get showers afterwards).

On a more serious note

To be honest, we never saw anything that we would count as abuse. Because this particular park does not have raving reviews from everyone, we were a little nervous. But while we were there all was well. The elephants looked happy, the mahouts were nice and caring towards their elephants and they explained everything as well as they could. The only problem I have is that they do offer rides for tourists (although they never offered them to us) and I am told that is bad for their backs. The logic for doing it anyway is that if the weight is less than 10% of the elephant’s weight, it should be ok. I’m no expert and I really don’t know if that is so. I wouldn’t ride an elephant, because I don’t need to go anywhere the elephant can take me.

These are working elephants; that much is true, but they always were. They cannot be put back into nature; there is not enough space for them (all because we need to have our palm oil!), meaning they would trample over farmer’s land or through villages in search of food. Which would upset the villagers and probably would lead to their death. These elephants are so domesticated, they might not even be able to fend for themselves anymore.

Is it then not more humane to keep them busy performing a purposeful job, than to put them down or in a zoo?

I don’t have a strong yes or no to this, as there are many sides to be taken into consideration. But like I said, both mahouts and elephants seemed happy and the elephants didn’t have to be beaten or punished to do what they were asked to do. There are three babies, also not a sign of distress. Could things be better? Probably, but then again I’m a Western person with Western believes and opinions. Many Asians have a total different relationship with nature and the animals in it. Are we to soft or are they too hard? I think the truth is probably somewhere in the middle. Either way, I never saw a bull hook anywhere.

And selfishly, nothing struck us as odd or weird behavior; we simply had the most amazing afternoon there in the river in Tangkahan.